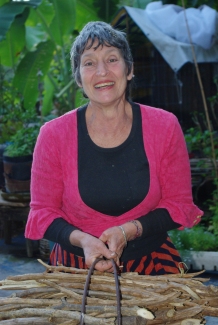 The latest post in my Lazy Left-Wing Gardener blog. An inspiring visit with Toña Osher in her ecovillage home near Tepoztlán,  Mexico. 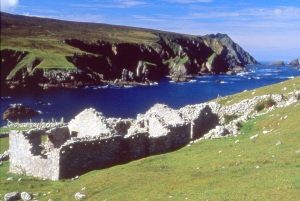 A story I wrote for the Ottawa Citizen in 2003

SLIEVE LEAGUE PENINSULA IS A LAND OF ROCKS, SHEEP DUNG AND SALTY CHARACTERS

Rocks are plentiful in this corner of County Donegal. My partner and I ventured out to the Slieve League Peninsula seeking something edgier than the package tours and relentless greenery of southwestern Ireland.

The name, Slieve League, we learned, has nothing to do with any kind of league: It’s simply the Anglicised version of the Irish, Sliabh Liag, which means, Mountain of Flagstones.

We found mountains: the highest sea cliffs in Europe, according to the locals. Paddy Byrne, who took us out in his boat to view the cliffs, had a conspiracy theory. The Slieve League Cliffs are rarely written up, while, further south, the Cliffs of Moher are touted as being the highest in Europe. Moher is much closer to Killarney, where the big money’s been invested in hotels and tour buses.

“Know what I mean?” said Paddy, mysteriously. “I’m sure of it. I brought the altimeter last time I was up.”

(A little post-trip research confirmed Paddy’s claims: Slieve League Mountain peaks at 595 metres and Moher reaches only 215 metres. Yet, a number of unofficial websites claim that the Cliffs of Moher are the highest sea cliffs in Europe.)

Paddy had a lot of stories. While he trolled in to give us a closer look at the patterns on the rocks, he talked our ears off. Just three weeks ago a Polish guy broke his leg at the cliffs and had to be rescued by helicopter. Everyone in a boat was in contact with the coast guard, searching for the wounded man.

Then there was the Belgian couple, a few years back. They parked their car at a pub in Carrick and set off along the top of the cliffs. The pubsters saw the car sitting there a long time and called the garda who notified the coast guard. Boaters were searching the cliffs, high and low. The garda informed local residents, giving out the car description and license plate. Not a trace of the two.

“One day,” Paddy continued, “the garda walked into a pub in Glencolmcille and showed the photo to a man and woman drinking there. The man said, ‘Oh yes, that’s my car. It was running a bit rough, so we left it behind. We’ve had a grand time in the pubs ever since.’”

Paddy had walked the length of the cliffs – he’d even crossed the infamous One Man’s Pass. He pointed up to it and our necks bent painfully. “Never again,” said he.

We heard this echoed by most of the strapping young locals, who’d try anything once. The Pass is a strenuous walk northwest from the village of Bunglass. The cliffs narrow to a width of less than a metre, straddling a sheer drop on both sides. Many daredevils cross on their hands and knees. On a windy day you’ll get blown off; on a foggy day, you might step off.

There’d been some windy weather prior to our arrival, and some sheep had blown off the cliffs. We found a dead sheep on the coast near Malinbeg. Looking up, we could see the survivors peacefully grazing the upper reaches of turf, standing almost vertical. They must have suction cups on their hooves.

Paddy had sheep stories for us too. “Quite an appetite, the sheep have. I knew a guy, spent a thousand punts, doing up his garden fancy-like. Then these three blokes, walking home from the pub, picked up a sheep and dumped it in the garden, for a joke. By morning there wasn’t a plant left standing.”

Most sheep wander freely all summer; at night they sit on the roads to absorb the heat from the pavement. “Imagine driving in the dark and having to dodge all those sheep,” said Paddy.

We were relieved not to have to contend with County Donegal’s narrow, winding roads. We’d opted to forgo the convenience of a car, to force ourselves to be more active on this holiday. For the most part, this worked. Bus Eireann has a convenient route from Donegal Town to the end of the peninsula. We spent hours on foot, taking in the country air with its mix of sea salt, peat smoke, and sheep dung.

We relied on the occasional taxi, though sometimes we had to wait a long time for a pickup. One driver, who we called “Heathcliff,” grunted as he drove us from Cashel to Malinbeg. Halfway there he decided this trip warranted a little clarity of vision. He pulled out an enormous pair of bottle-bottom glasses and affixed them loosely to his face, then floored the gas pedal and got us to Malinbeg in no time.

Our next daytrip was a tad remote for taxis. Fortunately we met a car-toting tourist at our guesthouse, who was also planning to visit the “famine village” of Port. Few visitors make the trip along miles of deserted mountain back roads. Port is a ghost town whose residents died during the Great Famine of the mid 1800’s. The survivors moved away. We found a collection of crumbling stone houses set against a stark coastal backdrop. For hours we scrambled up and down the hills, staring at the sun-bleached ruins. My partner was overcome by melancholy and decided she must have suffered the famine here in a previous lifetime.

There was one fixed-up house, a smattering of sheep, an anchor, and some fishing nets. The village was rumoured to have a present-day inhabitant, but we didn’t see anyone.

In the water we noticed a phallic-shaped rock. We’d heard that this was the tail of the Devil, still visible after St. Colmcille banished him into the sea. In front of the Devil was another rock, with words spray-painted, “No tax, no tax, ha ha ha,” a paean to modern-day devilry.

We saw a young man in the distance, approaching from the mountain to the west. He was a young backpacker. He introduced himself as Voldemar and said he was from Holland. He’d been travelling alone, sleeping in the wilds, pitching his tent in the most remote corners of the peninsula. He had a pack full of lentils and pasta. Every night he filtered water from mountain streams and cooked a rehydrated feast on his camp stove.

I asked if I could lift his pack. It was as heavy as a house.

“Well,” he admitted, “I’m carrying some rocks.” He opened his pack and showed us a collection of rather ordinary stones, which he had just hauled over the mountain. “You see, we have no rocks in Holland.”

Cuban Food: the Good, the Bad and the Ugly

Check out this piece that appeared in the Toronto Star on February 18. Click on the images to read the text. Researching this story was quite an experience, mostly scrumptious! 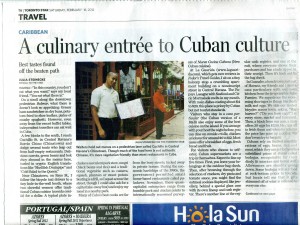 Why do we travel?

My first reason for travelling was the simple desire to escape Canadian winters.  My parents took me to Barbados when I was ten years old and I had the time of my life chasing geckos, swimming in the ocean and (strangely) shopping for Enid Blyton books. I caught a lizard and its tail broke off.  I pulled a long dried bean off a tree and it gave me a rash so my parents made me throw the bean away.

Even in my 20s, my first solo international trip was a journey through Mexico in January. I studied Spanish in Mérida and it was WARM!  As I chatted with my host family and watched the world go by from the zócalo, I noticed that there was a lot to learn. People had different priorities, and some of them made more sense than my values. Mexicans struggled to survive without privileges that I took for granted.  University professors cleaned offices at night to make ends meet.

“Travel broadens the mind.” A cliché perhaps but it can be true.  Though, I met some travellers who brought so many prejudices with them that broadening was not possible. Sometimes I’ve missed out on learning opportunities due to my own fear, but when I’ve opened up and made genuine connections, wonderful things have happened.

After many years of globetrotting, I feel enriched by all the great people I’ve met, from young lesbians in Laos to environmental activist nuns in India. My favorite travel stories are about unique cultural events and about people who are working to make a difference in their communities. On this page you’ll see some of my pieces from the past, and new writing, photos and videos from journeys to come.